Conjured up out of America’s obsession with spiritualism in the 19th century, “Ouija, the Wonderful Talking Board” was created in 1891 by entrepreneur Charles Kennard and attorney Elijah Bond, and made by the Kennard Novelty Company. After Kennard and Bond left the company in the early 1900s, William Fuld, one of the company’s first employees, took over and continued making the popular spirit board. By 1920, the game had become such a fixture of American culture that Norman Rockwell featured a couple playing with a Ouija board on the cover of the Saturday Evening Post. After Fuld’s death, the assets were sold to Parker Brothers, who manufactured the game until 1991, when the company was acquired by Hasbro.

Fast-forward to 2014’s Ouija, made by Platinum Dunes (Texas Chainsaw Massacre, The Purge,Teenage Mutant Ninja Turtles), Blumhouse Productions (Paranormal Activity, Insidious), and Hasbro Studios (Transformers & G.I. Joe series). Co-written and directed by Stiles White, the movie involves a group of teenagers who awaken a vengeful spirit using the board. Of course, the Ouija board has made appearances in several movies, including The Uninvited (1944), The Exorcist(1973), and Witchboard (1986), but White’s film was less about the spirit board as a plot device and more about cashing in on intellectual property. You see, back in 2008, after the success of Michael Bay’s Transformers, Hasbro and Universal Pictures signed an agreement to create motion pictures based on Battleship, Candy Land, Ouija, Stretch Armstrong, and other Hasbro properties. White’s directorial debut was a sleeper hit, grossing over $100 million worldwide, but it failed to move the planchette in terms of providing an interesting story or satisfying scares.

Enter Ouija: Origin of Evil, a second chance at turning Hasbro’s sleepover staple into a cinematic séance. This time, the development team approached filmmaker Mike Flanagan, who created Blumhouse’s 2014 hit Oculus and this year’s psychological thriller Hush, to put his unique stamp on the series. A prequel to White’s underwhelming film, the story begins in 1967, with widowed mother Alice Zander (Elizabeth Reaser) and her two daughters, 15-year-old Lina (Annalise Basso of Oculus) and 9-year-old Doris (Lulu Wilson, Scott Derrickson’s Deliver Us from Evil), running a séance scam business in Los Angeles. Scam is a harsh word, since Alice rarely takes money from her clients. Her mother was a fortune teller and passed down the tricks of the trade, allowing Alice to use her showmanship skills to provide closure to those seeking to communicate with lost loved ones. 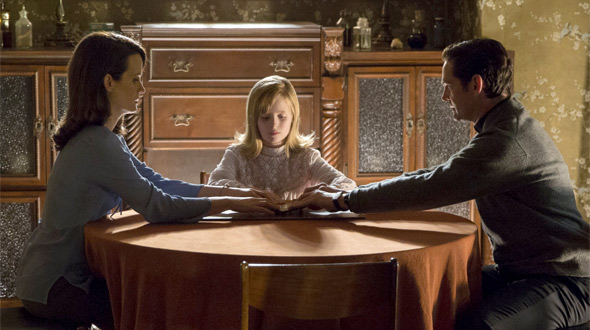 To spice up the charade, Alice purchases a Ouija board. The family business booms as Doris uses the spirit board to communicate with the dead. In the process, the little girl makes contact with a malevolent spirit who calls itself Marcus (character actor Doug Jones). When the evil entity overtakes Doris, the family turns to Father Tom (Henry Thomas) to wage a spiritual battle against the supernatural foe. Ouija: Origin of Evil is way better than it has any right to be. While the first film felt more like a supernatural slasher akin to Final Destination, Flangan’s follow-up is a character-driven period drama about a single mother and her daughters, à la The Exorcist. You spend the first 45 minutes of that film getting to know the characters, so when the horror happens, it actually affects you.

With Ouija: Origin of Evil, Flanagan does the same, allowing us to emotionally invest in Alice and both of her daughters so that we fear for them when they’re in peril. The storytelling is elevated by some great performances from Reaser, Basso, and Wilson, who each get some screen-time to themselves to establish their characters, which informs the family dynamic even more. These aren’t archetypes waiting to die in some horrifically inventive way — you care about their survival (a novel concept, I know).

Good horror movies all have one thing in common: they make you believe in the impossible. Whether it’s a supernatural stalker that kills you in your dreams or the demonic possession of a 12-year-old girl, good horror forces you to suspend disbelief while playing at your deepest fears and anxieties. I’m not a religious or spiritual person by any means, but The Exorcist makes me a believer for its entire 121-minute runtime. Similarly, skeptics can become superstitious around a Ouija board — the game has the power to turn non-believers into believers, if only for a moment. Flanagan understands this power and wields it effectively to produce a fun and surprisingly thoughtful story with some old-fashioned scares. I particularly love the retro vibe the filmmaker has added, opening the film with a vintage Universal Pictures logo and incorporating visible reel changes (or “cigarette burns” as they’re known) throughout.

What holds Ouija: Origin of Evil back from being a truly great horror film, however, is its finale, in which Flanagan abandons restraint and throws everything he has against the wall to see what will stick. Since this is a prequel, Flanagan is forced to create some connective tissue to the already forgotten original, which is a shame considering his movie is so good at standing on its own, it truly erases any need for its predecessor. Despite its third act foibles, Ouija: Origin of Evil is a solid bit of throwback fun for those in search of some Halloween thrills. It won’t chill you to the bone, but it may make you think twice about playing with Hasbro’s “wonderful talking board.”

The Legend of Barney Thomson